Bean power: Finger on the pulse of a drought-resilient future Against a hilly backdrop, Daud Bukuku and his wife Neema Obeti examine a handful of red specked beans from a large basket. The open fields behind them have just been harvested. But they’re lucky to have had a harvest at all – the beans they proudly shows us didn’t crop up for everyone.

Even they had a lucky escape. Working together with the Agricultural Research Institute Uyole in the Southern Highlands of Tanzania, Daud made a call to find out from researchers there what beans could be planted to help beat the drought and maintain high yields.

The severe drought that has gripped the dry area of this region this past season was taking its toll on their crops. He found out about Uyole 03 – an improved, drought-resilient sugar bean variety being tested – and  decided to invest in it, planting some local varieties as well, just in case.

Impressed with the hardier Uyole 03 beans, Daud and his wife now plants these on a regular basis. From one acre, this season they harvested 700 kg of beans – compared to the 150kg they got when planting local varieties. This season, at least 95 percent of the improved beans germinated. “Others who grew local varieties harvested nothing,” said Daud. None of the local beans germinated either.

Daud explains that the impact of more extreme weather events here, in the yellow and green hills near Mbeya, has been slow but not inconsequential. He can’t pinpoint when it started, but the weather has been playing havoc with his planting calendar.

He’s also learning to change his planting habits, to hedge his bets against drought. On the advice of researchers, he now plants his beans a bit later, so he doesn’t risk being caught out if the rains fail again. It paid-off this time: last season he and his wife only harvested 450kg of Uyole 03 variety.

Michael Kilango, head of the Uyole ARI-Uyole bean program, knows very well the challenges faced by farmers like Daud. They won’t get any income if their beans don’t grow. For that reason, his team – part of the Pan-African Bean Research Alliance (PABRA) – are hard at work. Uyole 03 has not only been chosen as a research priority because it is a profitable bean; it’s also drought- resilient.

“We’re always looking for varieties that are tolerant to disease, have improved color, size etc.,” notes Michael. “This year we applied to release two varieties; the materials are under a national release trial, pending testing around the country to check that they perform as what we say they do.”

Lameck Kasege, District Crop Officer with the Ministry of Agriculture for Mbeya District, is passionate about his work, and he speaks with an infectious enthusiasm punctured with rounds of laughter.

Having pioneered the Farmer Field School model since the late 1990s, his new-found passion is empowering women’s groups with information and technical knowhow so they can make more income from beans.

“The farmers are not just doing what we tell them. They are changing our research,” he said. “Getting feedback from them is really important.”

The success of the intercropping technique has been largely due to feedback from farmers about what works on their farms, he says.

But boosting yields is not enough if there is no market. Researchers at ARI Uyole are also linking bean farmer groups, mostly women who dominate the bean retail sector, with the private sector to ensure they have a ready market, with a fixed minimum price, when they harvest.

Daud now supplies 295 farmers with seed, up from nine when he first started three years ago. He also sells commercial bean grain to a private company, Raphael Group Limited, for export. “When I grew only maize I wasn’t getting any profit,” he explained. “The yield from beans wasn’t that good – 120 kg wasn’t enough to make money.”

Now, he and his wife keep cattle and pigs, have started a project to grow improved avocados, and have invested in a bio-gas plant. In future: “We’d like to ask the researchers to keep us informed of improved varieties, and which markets we can aim for,” he says. 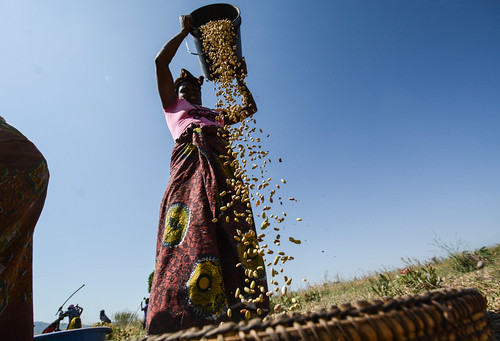 This research is funded in the framework of the Tropical Legume III project by the Government of Tanzania through the Bill & Melinda Gates Foundation (BMGF), and jointly implemented by ARI-Uyole and the International Center for Tropical Agriculture (CIAT).